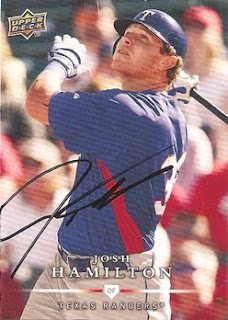 Who is this? Josh Hamilton, a Texas Rangers outfielder

What is this? An autograph card from the 2008 Upper Deck First Edition set

Where'd I get it? I wrote to Hamilton at the Texas Rangers' spring training facility in February and asked him to sign my card. I got it back in the mail yesterday.

How much did it cost? The card came out of a pack, and postage was 84 cents.

Why is this so special? Josh Hamilton was the feel-good story of 2008.

Hamilton was the number one overall pick in the 1999 amateur draft, but his minor league career was derailed by drug and alcohol problems. He was out of baseball for nearly three seasons.

Hamilton found God and cleaned up his act, and he finally made his big league debut with the Cincinnati Reds in 2007. He hit 19 home runs in part-time duty, but was traded to the Texas Rangers for pitcher Edinson Volquez that off-season.

With the Rangers, Hamilton had an All-Star season in 2008. In the All-Star Game's Home Run Derby, Hamilton hit 35 total home runs. He finished the season with a .304 batting average, 32 home runs and an American League-leading 130 RBI.

Josh Hamilton's autograph is distinctive, but not very legible. Though to be honest, with the number of autograph requests he must get I'm grateful that he signs at all.
Posted by Paul Hadsall at 12:35 PM