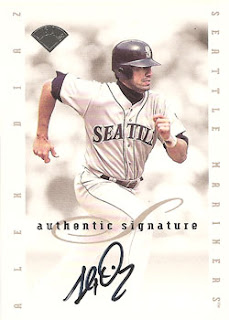 Who is this? Alex Diaz, a former journeyman outfielder for the Milwaukee Brewers, Seattle Mariners, Texas Rangers, San Francisco Giants and Houston Astros

Where'd I get it? It was another purchase from this month's baseball card show

Why is this so special? Alex Diaz started his career in the Mets minor league system in 1987. He was traded to the Expos in 1991 in a minor deal, and they flipped him to the Brewers later that year in another minor move. Milwaukee finally gave him the chance to play in the majors in 1992.

In 1995, Diaz appeared in 103 regular season games for the Seattle Mariners and six playoff games. He hit .247 with three home runs and 27 RBI. He also stole 18 bases. It was his best season in the big leagues.

Diaz briefly returned to the Mets system in 1997, but he never appeared in a major league game for New York. In parts of 8 seasons in the majors, Diaz appeared in a total of 366 games, hitting .239 with 8 home runs and 75 RBI.

Diaz has an interesting autograph -- it almost looks like he tried to draw a face in the "D"
Posted by Paul Hadsall at 12:49 PM

Alex Diaz is one of my favorite cards from the 1995 Topps set. That card would be a great one to get autographed.

That is a nice card, though I don't think I own a copy.

Diaz seems to have dropped off the radar since the end of his playing career, though.