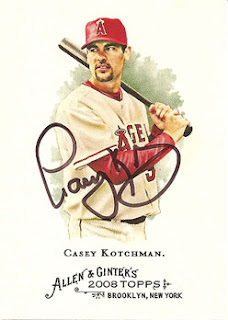 Who is this? Casey Kotchman, a first baseman on the Boston Red Sox who used to play for the Atlanta Braves and Los Angeles Angels of Anaheim.

What is this? An autograph card from the 2008 Topps Allen & Ginter set

Where'd I get it? Back in 2008, I wrote to Casey Kotchman c/o the Atlanta Braves and asked him to sign my card. He must be catching up on his fan mail, because I just got it back today.

How much did it cost? I probably paid a quarter for the card, and another 82 cents for postage.

Why is this so special? At the age of 26, Casey Kotchman has already played for 3 different Major League teams. The number 13 pick in the nation in 2001 hasn't quite lived up to expectations at the plate, but he's one of the best fielding first basemen in baseball. He can also say that he was traded for Mark Texieira.

Casey Kotchman's got an interesting autograph. You can clearly make out his first name, but his last name kind of trails off into a loop, for some reason.
Posted by Paul Hadsall at 8:45 PM