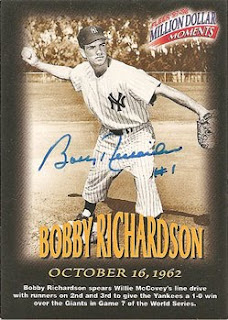 Who is this? Bobby Richardson, a former second baseman for the New York Yankees

What is this? An autographed card from the 1997-98 Fleer Million Dollar Moments insert set

Where'd I get it? I wrote to Bobby Richardson in June and asked him to sign it. He sent it back earlier this month

How much did it cost? The card was 33 cents at the local card shop. Postage was 88 cents.

Why is this so special? Bobby Richardson is a three-time World Series champion with the New York Yankees. As this card commemorates, he caught Willie McCovey's line drive to end the 1962 World Series, preserving the win for the Yankees and giving them their 20th title.

Like many older players, Richardson appears to take pride in his autograph and has a very readable signature. I like how he included his uniform number on the card.

Fleer ran a contest between 1997 and 1998. If you collected all 50 cards in the Million Dollar Moments set you could win $1 million. The first 45 cards were easily obtainable, but the final five were short prints to determine the contest prizes. Fleer also issued a full 50-card redemption set. I wonder if anyone claimed the top prize.
Posted by Paul Hadsall at 9:23 PM