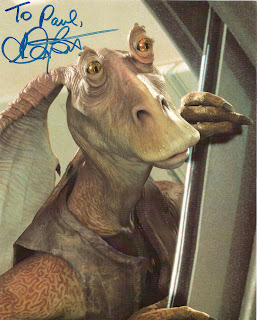 Who is this? Jar-Jar Binks, voiced by actor Ahmed Best
What is this? An autographed 8x10 postcard of Jar-Jar Binks from Star Wars: The Phantom Menace
Where'd I get it? I got it signed at the Big Apple Comic Con
How much did it cost? $25.

Why is this so special? I grew up with the original Star Wars films, and I was disappointed by the prequel trilogy. However, in the 10+ years since The Phantom Menace was originally released, it has grown on me.

Love him or hate him, Jar-Jar Binks is a big part of that film. Until recently, Best had stayed away from the convention circuit. I can't blame him, really - Jar-Jar provokes a strong reaction in people. I'm glad that he's giving it a shot again now.

Ahmed Best's autograph is about as legible as your typical modern baseball player's.

Tomorrow, I'll get back to posting baseball autographs. Hopefully everyone enjoyed the break.
Posted by Paul Hadsall at 11:29 PM