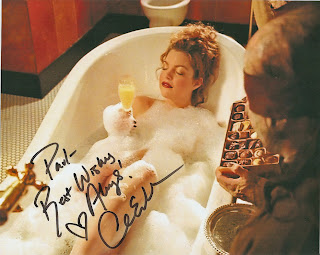 Who is this? Actress Clare Kramer, portraying the character "Glory" in the television show Buffy the Vampire Slayer.
What is this? An autographed 8x10 photo
Where'd I get it? I got it signed at the Big Apple Comic Con last night
How much did it cost? $25.

Why is this so special? Glory didn't have the best storyline of the Buffy villains, but she was the most fun to watch. Kramer said that it was a lot of fun to play Glory, calling it a "once in a lifetime" role.

Kramer has been in a number of films and television series, but is probably best known for her roles in Bring It On and Buffy.

I would not care to decipher her autograph, but at least the inscription is easy enough to read. :)
Posted by Paul Hadsall at 11:14 PM