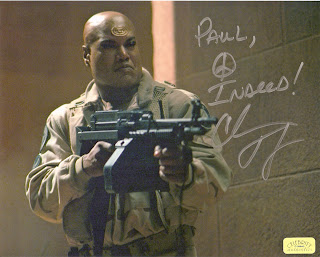 Why is this so special? Christopher Judge played Teal'c, my favorite character on Stargate SG-1. While Stargate never matched Star Wars or Star Trek at the peak of their popularity, it is an enduring franchise in its own right - SG-1 produced 214 episodes and was the longest-running science fiction series on North American television.

While Judge's autograph would fit right in among most current baseball players', he was very personable at the con. He shook hands with everyone and thanked them for coming.
Posted by Paul Hadsall at 10:07 PM