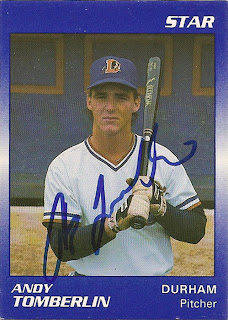 Who is this? Birmingham Barons hitting coach Andy Tomberlin
What is this? An autographed card from from the 1989 Star minor league set
Where'd I get it? From Zach. I think he got it signed at the Rickwood Classic this summer.


Why is this so special? Andy Tomberlin had an interesting career. Signed as an undrafted free agent in 1985, Tomberlin began his pro career as a pitcher. He apparently had control issues, so the Braves decided to turn him into an outfielder in 1988.

Between 1985 and 2000, Tomberlin played in nearly 1000 minor league games. He stayed in baseball following his retirement, working as a scout and minor league coach.

Tomberlin's signature is somewhat recognizable, but it wouldn't earn him a very good penmanship grade. (Do they still teach that subject in grade school? Somehow I doubt it.)
Posted by Paul Hadsall at 11:26 PM