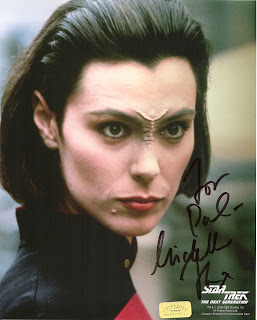 Who is this? Actress Michelle Forbes
What is this? An autographed 8x10 photo of Michelle Forbes as Ensign Ro Laren from Star Trek: The Next Generation
Where'd I get it? Forbes signed it at New York Comic Con for me on Saturday
How much did it cost? $30

Why is this so special? Forbes has appeared in a variety of television and movie roles. She was most recently on American tv in True Blood, as the season two antagonist Maryann Forrester. Although Forbes was perfectly pleasant at the Comic Con, she reminded me so much of Maryann that I couldn't wait to get away from the autograph line.

Forbes also played Admiral Helena Cain in the re-imagined Battlestar Galactica series. Though she was only around for three episodes (and a direct-to-video movie), Cain made a stronger impression than some characters did over multiple seasons. I was tempted to buy an Admiral Cain photo and get that signed as well, but I didn't want to spend another $30. (Anybody else remember when $20 was the standard fee for most actors at autograph shows?)

But as much as I liked Battlestar Galactica, I was a Star Trek fan first. I had to pick the Ro Laren photo when there was one available. Ro was a guest character on Star Trek: The Next Generation, and she proved to be popular enough that Forbes was offered the chance to have a lead role in the spinoff, Deep Space Nine. DS9 was my favorite of the Star Trek series, but I wonder how it would have turned out if Forbes had taken the part.

Forbes doesn't have a bad autograph -- it's better than a lot of baseball players.
Posted by Paul Hadsall at 7:41 PM