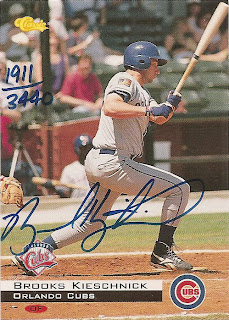 Who is this? Former Chicago Cubs outfielder Brooks Kieschnick
What is this? An autographed card from a Classic set in 1995
Where'd I get it? A dealer's dollar box at the local card show.
How much did it cost? $1


Why is this so special? Brooks Kieschnick is one of the more interesting baseball players from recent years. The Cubs selected him with the 10th overall pick in the 1993 draft. He was chosen as the National Collegiate Baseball Player of the Year twice and was a member of the College Baseball Hall of Fame's inaugural class.

Kieschnick began his pro career as a hitter, and had cups of coffee in the majors with the Cubs, Reds and Rockies. But it had become apparent that he would not be the star in the major leagues that he was in college.

In 2002, Kieschnick took up pitching and by the next year, he found himself on the Milwaukee Brewers' roster. He pitched, he pinch hit, he played outfield - in an era of ever-expanding bullpens, how could you resist a player with that kind of versatility? In 2004, Kieschnick worked solely as a pitcher (and occasional pinch-hitter). It was his final year in the majors, though he spent one more year in the minors before retiring.

For a guy who had to sign over 3,000 cards for Classic, Kieschnick had a pretty good autograph.

On a separate note, I'm absolutely fascinated by the monthly traffic stats for this site. GCRL's John Wooden autograph is the most popular post this month (and all-time.) That makes sense - he's one of the most famous names featured on the blog.

The next most popular post? My cards autographed by New Hampshire Fisher Cats trainer Bob Tarpey and strength coach Brian Pike. I can't quite figure that one out.

Thanks to Stale Gum and Autographed Cards for referring the most traffic.
Posted by Paul Hadsall at 9:43 PM

That's amazing! I have card #26 and his signature hasn't missed a beat 1900 times later.

That's pretty good... I wouldn't be able to keep my signature consistent that long.