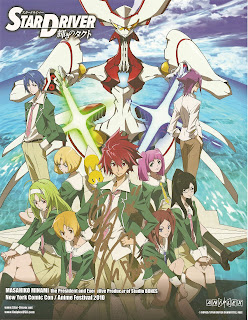 Who is this? Masahiko Minami, president of the Japanese animation studio Bones
What is this? An 8.5 x 11 autograph board produced for Minami's appearance at New York Comic Con / Anime Festival to promote his studio's newest series, Star Driver
Where'd I get it? At New York Anime Festival last Saturday
How much did it cost? It was free


Why is this so special? Minami was the producer of Cowboy Bebop, one of the best anime series produced in the past 15 years. He also produced a number of other series that have had American broadcasts on Cartoon Network, including Fullmetal Alchemist, Mobile Fighter G Gundam and Wolf's Rain.

Minami's autograph is a bit difficult to make out because he signed in gold paint pen on a fairly light-colored background. I think he chose it to go with the star motif - he drew one on every Star Driver board I saw him sign.
Posted by Paul Hadsall at 6:50 PM

wow... great addition to any collection. i couldn't see the auto at first... the gold ink really blends with the artwork... seriously sweet! congratulations.

Thank you. The autograph is a bit more noticeable if you click the small image to view it full size