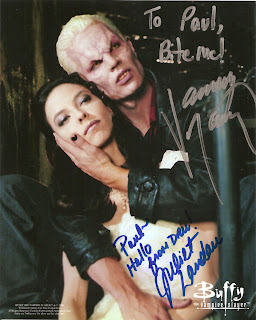 
Why is this so special? This is the month for finishing Buffy the Vampire Slayer multi-signed pieces. Earlier this month, I was able to get Doug Jones to sign a photo of the Gentlemen from "Hush", and last weekend I was able to get Marsters to sign this photo of Spike and Drew.

There was a sizable, steady line for Marsters all weekend whenever he was at his booth, even though he was charging $40 for an autograph. I put it off until Sunday, and I still ended up waiting for close to an hour before I got through his line. He had sold out of all of his photos except for a few copies of a general shot and a small pile of Torchwood pics.

Marsters did take the time to shake hands with everyone and talk with them. He mentioned how much he enjoyed working with Juliet Landau. Since I was wearing a Serenity t-shirt, he couldn't resist pointing out that Firefly was a great show, but "Serenity" had to be the most boring movie title ever. It's hard to disagree. :)

This was the final autograph I got at New York Comic Con. Tomorrow, I'll get back to posting baseball cards of players that you may or may not have heard of. :)
Posted by Paul Hadsall at 7:04 PM

If you like Juliet Landau's acting you should check out Tobe Hooper's Toolbox Massacre as she has a (small) role in it. Beautiful piece by the way, I love how James signed it!