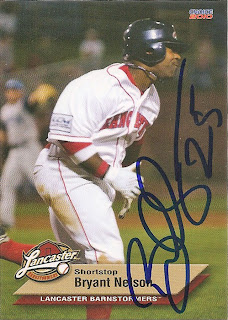 Why is this so special? Bryant Nelson has played in over 1600 professional games, including 25 with the 2002 Boston Red Sox. In recent years, he's played a lot of independent baseball in the northeast. In 2006, he played for the Bridgeport Bluefish in the Atlantic League. In 2007, it was the Long Island Ducks. In 2008, Nelson played for both the New Jersey Jackals in the Can-Am League and the Ducks again. Last year, it was the Camden Riverharks and this year it was the Lancaster Barnstormers. Wherever he's gone, Nelson has been a class act.

Nelson signed this card horizontally, but I don't remember if it was because of the way I was holding the card or if he wanted more room for his autograph.
Posted by Paul Hadsall at 11:15 PM