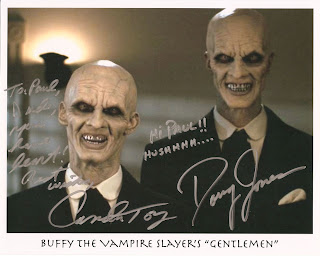 Who is this? actors Camden Toy and Doug Jones
What is this? An autographed 8x10 photo of Buffy the Vampire Slayer's "Gentlemen"
Where'd I get it? Camden Toy signed it at a Chiller Theatre show several years ago; Doug Jones signed it at Big Apple Comic Con tonight.
How much did it cost? $40

Why is this so special? Buffy the Vampire Slayer was one of my favorite television shows when it was running... and "Hush" was one of the best episodes of the series. The episode is largely devoid of dialogue, as a group of demons referred to as the Gentlemen arrive in Sunnydale and steal everyones' voices.

Jones and Toy created two of the more memorable (and more unsettling) demons in the series even though they didn't have a single line in the episode. In contrast to their on-screen personas, both Toy and Jones were very friendly when I met them.

Jones was late arriving to the comic con tonight because his flight was delayed by the remnants of Tropical Storm Nicole. Yet when he got there, you never would have known. He chatted with fans, entertained kids and posed for photos.

If you're not a big Buffy fan, you'd probably consider Pan (Pan's Labyrinth) or Abe Sapien (Hellboy & sequels) to be Jones' most notable role. He also played the Silver Surfer in the 2007 Fantastic Four movie, and was Mac in the McDonald's "Mac Tonight" television spots in the late 80s and mid 90s.

Toy probably is best known for his Buffy roles, though he has appeared in a number of other films and television shows.

Both men have clear, legible signatures.
Posted by Paul Hadsall at 11:37 PM