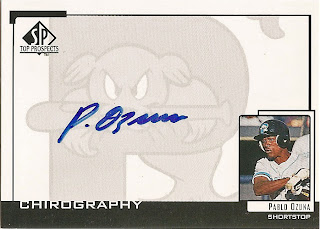 Who is this? Former Portland Sea Dogs shortstop Pablo Ozuna
What is this? An autograph card from 2000 Upper Deck SP Top Prospects Chirography
Where'd I get it? eBay
How much did it cost? $1.

Why is this so special? When the Newark Bears signed Pablo Ozuna this season, I looked to see if I had any of his cards. When I found that I did not, I check online and found this one for less than it would have cost to acquire any to get signed myself. Ozuna only stayed around long enough to get into 28 games, so it's probably for the best - I may not have had a chance to get him to sign anything.

I've got a couple of these Chirography cards in my collection, but I still haven't decided if I like the design. It does place the focus on the autograph, but it's not especially attractive and it doesn't leave much room for a player photo. I find it interesting that Ozuna signed "P. Ozuna" even with all that space to fill.

Ozuna played in the majors for parts of seven seasons. He earned a World Series ring with the Chicago White Sox in 2005. Ozuna also played for the Florida Marlins, Colorado Rockies and Los Angeles Dodgers. In 309 games, Ozuna had 191 hits, 3 home runs, 45 RBI and 29 stolen bases.
Posted by Paul Hadsall at 11:24 PM