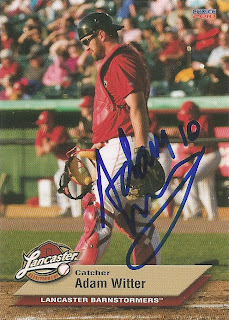 Why is this so special? Adam Witter signed with the San Francisco Giants as an undrafted free agent and began his pro career in 2006. At the lower levels of the minor league system, Witter put up good numbers - especially for a catcher.

When he hit AA in 2008, he still had good power numbers. Unfortunately, he wasn't making enough contact. He struck out on average once every four at-bats, and he finished the year with a .238 average.

Witter continued to struggle in 2009, though he did make it up to AAA for 44 games. This season, he found himself in independent baseball with the Lancaster Barnstormers. There he hit .275 with 17 home runs in 222 at-bats.

The baseball card gods were not kind to Adam Witter this year - that may be the worst game-action shot I've seen that didn't involve the player striking out or breaking his bat. He's got an interesting signature - you can clearly read "Adam," but I have no idea what's going on in his last name after the "W."
Posted by Paul Hadsall at 11:06 PM