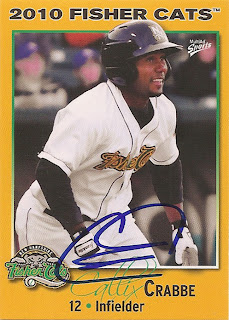 Why is this so special? Crabbe, a native of the Virgin Islands, was selected by the Milwaukee Brewers in the 12th round of the 2002 draft. Until 2008, when he was selected in the major league phase of the Rule V draft, Crabbe remained in the Brewers' organization.

Crabbe appeared in 21 games for the San Diego Padres in 2008, but was eventually returned to the Brewers. He left the organization for good as a free agent at the end of the year, and spent 2009 in Seattle's farm system before joining the Blue Jays organization this year.

All the way back to AA? That is rough.

His signature has shortened a great deal since the 2008 Documentary card I pulled.

He was at AAA for a little while this year, but most of the time, it was AA. At least he hasn't been forced to the indy leagues yet.