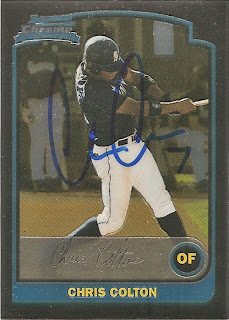 Who is this? Wichita Wingnuts & Joliet Jackhammers outfielder Chris Colton
What is this? An autographed card from the 2003 Bowman Chrome set
Where'd I get it? From Zach, who probably got it signed at a Northern League or American Association game this year.


Why is this so special? Chris Colton was selected by the Seattle Mariners in the 15th round of the 2001 draft. He made his pro debut with the Everett Aqua Sox in 2002. Colton remained in the Mariners' organization into the 2007 season, but he never advanced past A-ball. Since then, he's played independent baseball. It's a bit surprising that he was included in a Bowman set.

Like yesterday's featured player, Colton's autograph is basically his initials... at least he added his uniform number.
Posted by Paul Hadsall at 11:48 PM