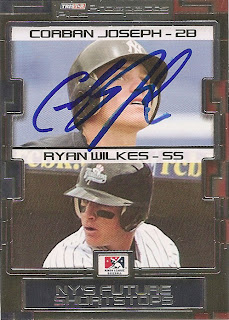 Who is this? Trenton Thunder second baseman Corban Joseph
What is this? An autographed card from the 2008 TriStar Prospects Plus set
Where'd I get it? Joseph signed it for me before a Trenton Thunder game this summer
How much did it cost? The card came from a discounted blaster double-pack

Why is this so special? The Yankees selected Corban Joseph in the fourth round of the 2008 draft. He rose through the ranks in the farm system, earning a late-season call-up to AA at the age of 21. He struggled in Trenton, and is likely to start the season there again in 2011.

I had two cards that featured Joseph, but neither was really ideal for getting signed - there just isn't any room for a signature except right over the players' face. 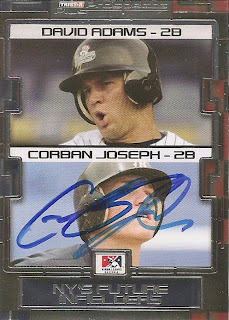 Very cool Paul, I've heard a lot about Corban since his brother, Caleb, is in the O's system. I didn't know that he had any cards, but like that you posted them.

Interesting... I didn't know that Corban had a brother that played ball.