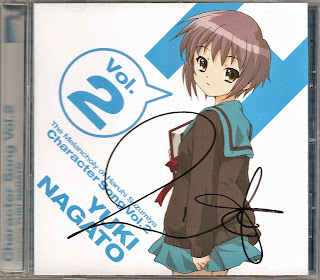 Who is this? Actress & singer Minori Chihara
What is this? An autographed CD of Yuki Nagato's character songs
Where'd I get it? At New York Comic Con / New York Anime Festival last Friday
How much did it cost? It was free*


Why is this so special? I apologize for the sporadic posts over the past few days - I spent the weekend at New York Comic Con. I had originally scheduled posts for the days I knew I wouldn't be around to write anything, but then I got sick earlier last week and ended up using some of them early.

This is the first autograph I got over the weekend; I plan to post the rest throughout the week.

Minori Chihara is a Japanese voice actress and singer best known for portraying Yuki Nagato in the television anime The Melancholy of Haruhi Suzumiya.

When Chihara was announced as a guest of honor for the New York Comic Con / New York Anime Festival, I decided to go. They announced that 100 tickets for her autograph session would be distributed at 7 a.m. on Friday, six hours before the show opened to the public. I got there to join the line a little before 6 a.m., and there were already 30 or more people in front of me.

The autograph session took place later in the afternoon, and was a very quick affair. Chihara "signed" items very quickly (though her autograph looks more like the number "2" with a little flower doodle on the end of it than anything else.)

Later that evening, she introduced the screening of the film "The Disappearance of Haruhi Suzumiya," which she provided the theme song for.