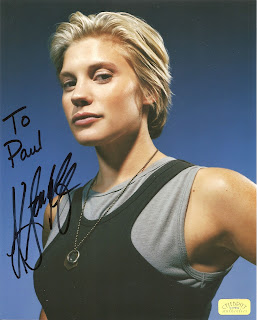 Who is this? Actress Katee Sackhoff
What is this? An autographed 8x10 photo of Katee Sackhoff as Kara Thrace from Battlestar Galactica
Where'd I get it? New York Comic Con last Saturday
How much did it cost? $30

Why is this so special? Katee Sackhoff was one of the most popular paid autograph guests at New York Comic Con - James Marsters was the only one who might have had longer lines. I was going to skip getting her autograph for that reason, but by the end of the day on Saturday her line had pretty much dwindled away.

Unlike Christopher Judge, who wanted to shake hand with everybody, Sackhoff had a sign up on her table saying that due to cold & flu season, she did not want to shake hands with anybody. I really can't blame her there. She also didn't want to have her photo taken - her handler chased away a video camera guy with a press pass while I was getting my photo signed.

Sackhoff gained fame by playing Starbuck in Battlestar Galactica, but since the show went off the air she has found a variety of other roles.

Her autograph is nicer than many modern baseball players, but I wouldn't want to have to decipher it on a random item.

Two more Comic Con autographs, then we'll get back to baseball next week. :)
Posted by Paul Hadsall at 11:36 PM