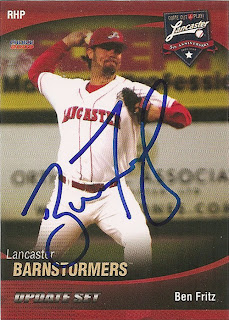 Why is this so special? Ben Fritz was the 30th player chosen in the 2002 draft, picked by the Oakland Athletics. He moved through the Athletics' farm system, advancing as far as AAA in 2007. In 2008, Fritz was chosen in the minor league phase of the Rule V draft by Detroit. He pitched for AA Erie that year - his final year in affiliated baseball.

When he was released, Fritz signed with the Lancaster Barnstormers. He's pitched there for the last three seasons. This year, he was 3-7 with a 3.72 ERA. 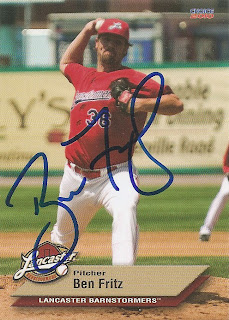