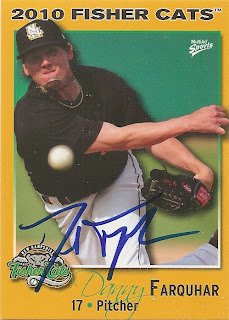 Why is this so special? The Toronto Blue Jays selected Farquhar in the 10th round of the 2008 draft. He's moved through the farm system, working solely as a reliever. This season, he pitched in 53 games for the Fisher Cats. He had a 4-3 record with 17 saves and a 3.52 ERA, striking out 79 in 76 innings.

I'm not quite sure what's going on with his autograph.
Posted by Paul Hadsall at 6:46 AM