corey koskie has a message 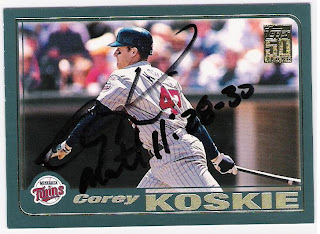 Who is this? former twins third baseman corey koskie

What is this? A 2001 topps base card signed by koskie

Where'd I get it? this was a through the mail success (took about a year, though)

How much did it cost? i think i got the card in a hobby pack, so i'm going to say about $0.20 plus a couple of stamps

Why is this so special? my son was born in 2000. i took him to his first game on july 1, 2001 - tigers vs. twins at the metrodome. we got there a little late (hey, i'm from southern california), and the twins were already at bat in the bottom of the first. the first batter we saw was corey koskie, who promptly hit a home run.
i have to admit that, even prior to the game, i felt a certain kinship to koskie, a manitoban, as my parents are both canadian. afterwards, i thought it would be nice to have a koskie memento from the game, and so i mailed a couple of cards to him at the metrodome. about a year later, he returned both cards. they were both signed, with an extra notation - matt 11:28-30.
the autograph itself is not so nice, in fact, the scripture notation is clearer on both cards. this is due, in part, to the cards i chose - there is a darkness to the background that makes the pen difficult to see.
corey had his best season that year, going 20/20 with over 100 rbi. after a few more years with the twins, he went on to play for the blue jays and the brewers before suffering a concussion in 2006 on a freak play. he hasn't played since, which is too bad. the last time i saw him was at twinsfest last year - not as a former player signing autographs, but as a father with his kids enjoying the activities on the field of the metrodome.
i have to admit, i still haven't looked up the scripture. sorry corey.
Posted by gcrl at 10:11 PM

Matthew 11:28-30
"Come to me, all you who are weary and burdened, and I will give you rest. Take my yoke upon you and learn from me, for I am gentle and humble in heart, and you will find rest for your souls. For my yoke is easy and my burden is light."