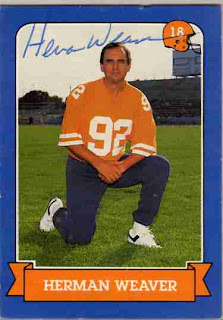 Who is this? Tennessee punter Herman Weaver.

How much did it cost? Ten cents.

Why is this so special? So what is this thing? Answer: I DON'T KNOW. I picked this card up last Sunday at the card show in a dime box if you can believe it. I don't really know how to explain this thing, so I'll describe the card first.

This is not a licensed card obviously, as evidenced by the total lack of logos. It's a simple enough design to look fairly legit though. If the number 18 in the top right corner and the 92 on the jersey is confusing, the 18 was Herman's Pro number. The back is simple white text and a crude drawing of Herm. The back notes that Herman was "one of the top 20 Punters of all time" as chosen by the Sporting news in 1988. The personal info talks about how he used to booze it up in high school due to peer pressure but then he found God and asked the Lord to come into his life. We now know that this is not a Beckett promotional card 'cause Beckett's the DEVIL. Ha ha! I made a blasphemous joke! The testimony is explained by the "Sports World Ministries Inc. Box 500 Tazewell TN 37825" line on the side. Sports World is a ministry that uses former NFL players as motivational speakers that speak to students and Herman is on the list. As for the "Preferred Risk Group / West Desmoines Iowa / America's nondrinkers insurance company" I guess they sponsored the cards? Anyway, it's a really oddball card, that's for sure.

Herman is easier to write about. He was a punter for Tennessee and went on to kick for the Lions and Seahawks in the NFL. He has a great nickname: THUNDERFOOT. He lasted 11 years in the league, and even holds an NFL record! Unfortunately it's for most blocked punts in a career. Sounds more like Blunderfoot. Hey, he played for the Lions... gotta expect bad things to happen in Detroit. I'm pretty sure I've got one of his legit cards somewhere, I just didn't know I had a card of THUNDERFOOT before now. Like I said, Herm is now a motivational speaker, you can see a somewhat jaded look at his work here. At least he doesn't live in a van down by the river. It's a pretty pedestrian signature, both names start off strong, but devolve into squiggles. Still, an NFL autograph for a dime, can't beat that. 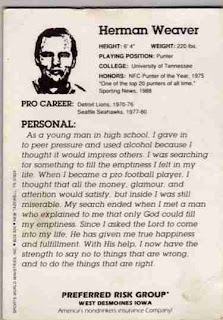 That is definitely a unique card there. Way to use that dime wisely!