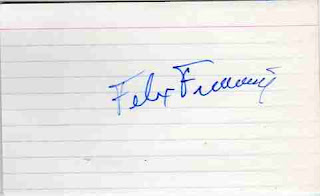 Who is this? Indians shortstop Felix Fermin.

What is this? An autographed index card.

How much did it cost? Twenty-five cents.

Why is this so special? I totally got this guy confused with Braves shortstop Felix Millan. Oops. Felix wasn't a bad player... he was a terrible hitter, but not a bad player. He knew how to bunt. He was good at defense. I remember him most with the Indians, but he played with the Pirates, Cubs and Mariners as well. He was with the '95 Mariners division winning team that lost to the Indians in the ALCS. The dude is a great manager too as he's won five Dominican league titles and one Mexican league title. So I got the wrong cat-like shortstop. It's still a decent autograph.

So what's up with the index card? Well, a lot of people collect signatures that way. They are easier to send through the mail for one thing. I didn't send it through the mail though, I bought it from a dealer at a card show. He had a bunch of cheap sigs on index cards and bumper stickers and stuff, so I picked up a few of 'em. It's an uncertified auto on a blank index card, but to paraphrase Lewis Grizzard, "It didn't cost but a quarter". The signature looks like the other ones I've found online so it's either legit or a master forgery. It's a nice signature too, starts off strong with bold Fs and Felix gives up on his last name and just scribbles away. I do that too. The bell in my last name just turns into a bunch of loops just like Fermin is now Feeeeeeeeen. I'd say it's worth a quarter. I got a whole post out of it after all!
Posted by dayf at 9:32 PM