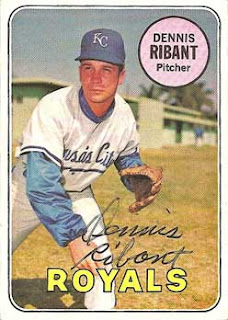 Who is this? Dennis Ribant, a pitcher for the New York Mets, Pittsburgh Pirates, Detroit Tigers, Chicago White Sox, St. Louis Cardinals and Cincinnati Reds (but not the Kansas City Royals) in the 1960s

What is this? An autographed 1969 Topps card

Where'd I get it? Dennis Ribant signed and returned a card that I mailed to him.

How much did it cost? 40 cents for the card, plus 84 cents postage

Why is this so special? Ribant had an unspectacular career in the Major Leagues, but he was the first Mets starting pitcher to finish a season with a winning record. In 1966, Ribant went 11-9 for a team that finished at 66-95. It was his best season in the big leagues.
This card is interesting because Ribant never played a single regular season game for the Royals. After the 1968 season, Kansas City purchased Ribant from the Detroit Tigers. He went to spring training with them in 1969, and Topps managed to get his photo for this card. However, before Opening Day, the Royals sold Ribant to St. Louis.
Ribant has a nice, clean signature. You can make out every letter of his name. Try to do that with some modern players.
Posted by Paul Hadsall at 6:55 PM

I love the old Kansas City scripted road unis. I'm glad that they finally went back to them.