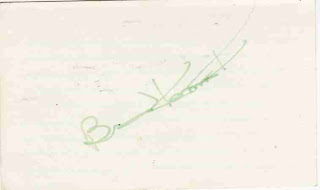 Who is this? Braves boondoggle Brad Komminsk.

What is this? An autographed index card.

How much did it cost? A quarter.

Why is this so special? There were several Brad Komminsk autographs in the binder where I found this one, but I purposely picked the ugliest one as it represents Brad's career better. This card wasn't actually signed in lime green, it most likely was black ink that faded after being left out in the light. Brad is the epitome of AAAA player as he utterly ruined pitchers in Triple-A, but couldn't hit his weight in the majors. I'm not exaggerating about that, his lifetime batting average was .218. He was a first round draft pick though and he killed in the minors so he ended up being the future franchise for the Bravos back in the early 80's. Even Hank Aaron labeled him a "can't miss" player and... wait, what does that say?!

In 1983, the Braves reportedly turned down a trade offer that would have sent Komminsk to the Boston Red Sox for Jim Rice.

WHAT!?!?!?!! OH GOD! WE COULDA HAD JIM RICE? FOR BRAD KOMMINSK???? OH GOD OHGOD!!!!! MURPH AND RICE IN THE SAME OUTFIELD?? JIM GIVING DALE PROTECTION IN THE LINEUP WHEN HORNER'S KNEES WENT ALL WONKY??? OH GOD!!!

Ugh... I'm gonna be violently and copiously sick. I-I'm sorry folks, I can't write about Brad Komminsk anymore. I have to go cry for a few weeks.

Good lord...I had no idea about the sordid past of Brad Komminsk. I know him best as the Indians outfielder who would have robbed Cal Ripken of his 20th home run in 1989. Would have, but he leapt at the wall in CF in old Memorial Stadium in Baltimore and his momentum took him over the top of the wall. He landed safely on the other side (it was a multipurpose stadium, so there were no seats out there), but couldn't get the ball back to the infield in a timely fashion and it was ruled a HR.

He joined the O's the next year, hitting a sterling .238 in 46 games. This year, he managed our AA Bowie Baysox to the league championship, where they were defeated by Akron, who totally cheated by using a rehabbing Travis Hafner, who in turn killed Bowie. But Komminsk was not blameless - IIRC, the dummy called for a questionable bunt that took the bats out of the hands of his two best hitters (the first one bunted, the next one was walked) and blunted a rally.