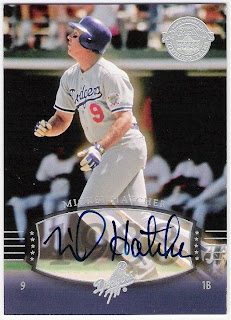 Who is this? mickey hatcher

What is this? an autograph card from 2004 upper deck legends timeless teams

Where'd I get it? ebay

How much did it cost? about $6

Why is this so special? mickey hatcher is one of the stunt men. the backups, pine-riders, role players - whatever you want to call the guys who come of the bench and/or spot start. in 1988, he got the start in left field when kirk gibson couldn't play in game 1 of the world series. all the hatch did was hit a 2-run homer in the bottom of the first, and almost overtake steve sax on the basepaths.
mickey came up through the dodgers' organization. i remember listening to the game he made his major league debut in - i believe his first at bat was with the bases loaded. a chance to do something special. he walked.
traded to the twins for ken landreaux, hatcher missed out on the dodgers 1981 world series championship. then, he was released by the twins and signed with the dodgers prior to the 1987 season. this means, of course, he missed out on the twinkies' first championship, too. so it was nice to see hatcher get his ring in 1988 after just missing out twice.
now a coach with the angels, i had a chance to meet him at spring training this past season. a nice guy all around.
the auto here is nice and clean, on the card and pretty darn cool looking. i love this set, and am glad upper deck is using it again in their current timeline release.
Posted by gcrl at 11:01 PM