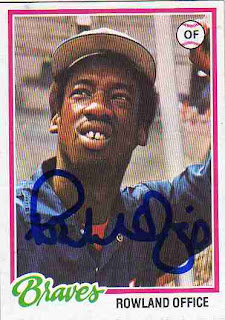 Who is this? Braves legend Rowland Office.

What is this? An autographed 1978 Topps card.

Where'd I get it? EBay or something.

How much did it cost? Probably not a whole lot.

Why is this so special? When I was a kid Rowland Office was the Expo who looked like the photographer surprised him on his 1981 Topps card. Today, Roland Office is the patron saint of my favorite Braves blog. Rowland was actually a mainstay of the Braves' outfield in thew '70s, although I didn't know that until much later. Rowland made is debut in 1972 as a nineteen year old, then returned to the Braves in 1974. He manned the outfield for 6 years before he was granted free agency and signed with Montreal. Rowland also played two games with the Yankees and was signed by the Phillies but never got called up to to club.

Rowland never put up great numbers with the Braves, but then again, no Brave did in the late '70s. He's better known today for his odd name and, um, unique looks. That whole late 70's team has always somewhat alien to me. I didn't really get pathologically obsessed with the Braves until about 1980 or '81, And I wasn't really interested in older Braves other than the Biggies like Aaron, Mathews and Spahn. Then when I started to appreciate more the older teams I dove into the really old ones like the 1914, 1935 and 1948 clubs. Then the '91 Braves hit like a tornado and I had a new set of players to obsess over. As a result, now I'm in my 30's and the Braves of the last '70s are still as foreign to me as they were when I was a kid looking at that '81 Topps card. I've had the cards for years, Rowland, Buzz Capra, Mickey Mahler, Marty Perez, Cito Gaston, Adrian Devine... but they never really connected with me (other than Knucksie, but his career crosses though several Braves eras) like the teams of the '80s.

A few years ago I came across a lot of 1978 Topps Braves cards, all autographed, on one of the auction sites. I knew a deal when I saw one and snatched it up. Now I have about a third of that that team set signed (including this guy, no relation) including Rowland. Now, the 1978 club will never be burned into my mind as indelably as the '82 squad, but this card of one of the icons from that era helps to provide a connection for me. By the way, you can barely see it against the dark warmup jacket, but the signature is gorgeous. Thick, bold and confident. You can see the signature better here, but it's not as nice looking as mine. Cood looking card, good looking sig. Office even manages to draw a walk on the back of his card. That's the way to get on base, Rowland! 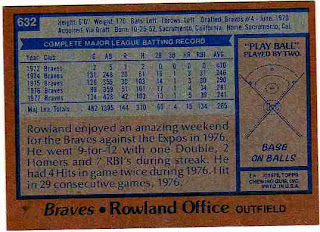 I never heard of Mr. Office before today, but I love that photo and the name!

Holy crap! There were two players named David Campbell? I only knew of the one that later became a sportscaster.