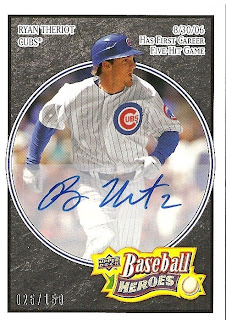 Who is this? Chicago Cubs shortstop/second baseman Ryan Theriot.

Where'd I get it? Out of a pack of UD Heroes I purchased a few months ago.

Why is this so special? Ryan "The Riot" has been a pretty solid middle infielder for the Cubs these last few years. I've always seen him as a throwback kind of middle infielder with good contact and very little pop in his bat. He doesn't fit in with today's shortstops and second basemen - guys like Utley, Uggla, Kinsler, and Hanley Ramirez, each of whom has at least as many as Theriot's 14 career home runs just this year. Despite the lack of pop, you can't argue with Theriot's .307 BA and .387 OBP last year. The Riot should be a pretty solid player for a long time.
Upper Deck tells me that Ryan Theriot signed the sticker that they have conveniently placed upon my Heroes card, but I could swear that it was signed by somebody named B Uit 2. I'm pretty sure that the 2 is for his jersey number, but that's the only thing that makes sense out of this auto. The signature could be much better, or even recognizable as Theriot's.
Posted by Patsearcher at 1:40 AM