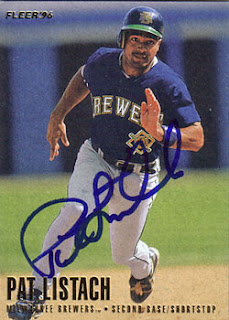 Who is this? Pat Listach, a utility player for the Milwaukee Brewers and Houston Astros in the 1990s

Where'd I get it? One of my trading partners got it signed for me at the ballpark this season when Listach was managing the Iowa Cubs

How much did it cost? I'm not quite sure what I traded for it.

Why is this so special? Pat Listach was the 1992 American League Rookie of the Year for the Milwaukee Brewers. He had the best season of his career as the Brewers' full-time shortstop, batting .290 with 1 home run, 47 RBIs and 54 stolen bases.
After managing the Iowa Cubs for the past two seasons, Listach will become the Washington Nationals' third base coach in 2009.
The autograph is reasonably clear for a modern player's, but I don't think Listach will be winning any penmanship awards.
Posted by Paul Hadsall at 6:32 PM