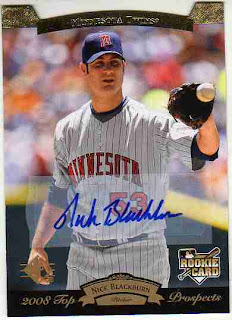 Who is this? Twins pitcher Nick Blackburn.

What is this? An autograph card from 2008 Upper Deck Timelines, card number 201.

Where'd I get it? Retail pack from Wal-Mart.

Why is this so special? Last night I realized I hadn't bought the onions for Thanksgiving. I needed to bring a side to dinner and I was going to bring some creamed onions. I like onions, it's easy to make and it's something that no one else would make. Here's how to make it:

Get about a pound of pearl onions. I bought two packages of them at Wal-Mart which I think was a pound.
Boil some water. Put the onions in the water for about three minutes. A little longer will make them more tender, but harder to work with.
Take out the onions and rinse them in a cold water bath until they are cool.
Cut off the top and bottom of each onion and remove the peel.
Once the onions are all peeled, melt the butter in a pan on low heat.
When the butter is melted, slowly add the flour, stirring the whole time to make a roux. I didn't exactly measure the flour and butter, I just kind of eyeballed it. Don't cook too long because burned roux is not Good Eats. Stir it until it combines into a golden paste.
Sloooowly add the milk, stirring like mad the whole time. If you add the milk too fast you'll have lumpy gravy. Great album, lousy dinner. This I eyeballed as well, just add milk to the roux until it's the thickness you want. I like it thick.
Add salt and freshly cracked pepper to taste and stir in the parmesan.
Once the sauce is complete, add the onions and let it simmer for a few minutes.
Plate and eat!

So the plan was to make that, but I had no onions. I trucked out to Wally World late last night grumbling the whole way since I hadn't planned this out properly as usual. I got the onions, a couple of other things I was low on and swung by the card aisle, hoping to find some Stadium Club. No dice. This Wal-Mart always gets things two or three weeks after everyone else. They had some Timelines though, so I picked up three packs hoping to get a Timeless Teams short print to add to my Stadium collection. I got home and ripped. First pack, CC Sabathia with a Miller park back, sweet! Second pack, Jed Lowell, Fenway back. Dang, I've got Jacoby Ellsbury already. Third pack, rats. '94 All-Time Heroes Ryan Braun. No stadium back in that pack. Well, let's look at the other short print - whaaa? Autograph?

So that's how my Thanksgiving creamed onions dish got me an autographed card of Nick Blackburn, who looks like he could be a pretty decent major league pitcher for the Twins. It's a nice readable blue autograph on a shiny clear sticker that is placed in the dead center of a lightned space on the card reserved for the signature. Not bad, eh? There's one more reason to love onions. 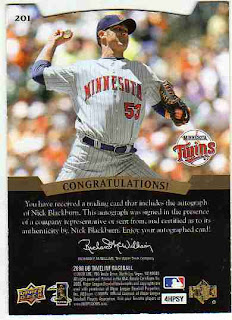 It is a nice card and signature. Actually, it's a great name. Dickensian.

Now you will probably always and forever associate pearl onions with Nick Blackburn.