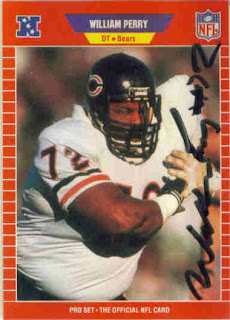 Who is this? Bears legend William "The Refrigerator" Perry

Where'd I get it? I got this card signed at an Oklahoma Redhawks game this past summer.

Why is this so special? It's "THE FRIDGE"! Without even going back and looking at all of the previous posts on here, I can guarantee that none of the players featured had a G.I. Joe action figure made of them. But, The Fridge did. He even came with a medieval-style mace with a football on the end of the chain.

Besides that, he was one of the main members of the great 1985 Super Bowl winning (and shuffling) Chicago Bears. He also has more Super Bowl touchdowns than the great Walter Payton. He was one of the few 300+ pound players in the NFL in the mid-80s. Because of that, Mike Ditka would throw Perry in at fullback on short yard situations. He had five rushes during the regular season that year for seven yards and two touchdowns. He added a touchdown in the Super Bowl and even tried to pass a ball on an option pass play, but was tackled for a loss instead.

At the baseball game where I got this autograph, The Fridge was not looking very well. He had lost lots of weight from his playing days, which is good, but he was in a wheel chair. He even had a hard time holding the pens to sign with. He had to hold it between his thumb and forefinger. It's hard to explain, but it looked like he was holding chopsticks with two fingers. But, he was in good spirits. He was talking to the fans and taking pictures with them. He even signed two cards for me, which I wasn't expecting. Later on, I learned that he was suffering from Guillain-Barré syndrome. It's a complicated disease that is too hard to explain, but you can read more about it here.
Posted by zman40 at 12:48 AM