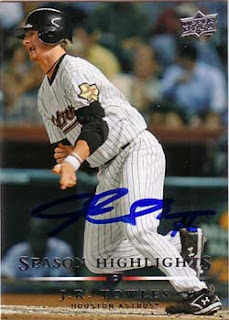 Who is this? Houston Astros catcher J.R. Towles

What is this? A signed 2008 Upper Deck season highlights cards

Where'd I get it? One of my trading partners got it signed at a Round Rock Express game this summer.

How much did it cost? I forget what I traded for it.

Why is this so special? J.R. Towles went all the way from A-ball to the majors in 2007. In September, Towles set a new Astros team record by driving in 8 runs in an 18-1 win against the St. Louis Cardinals. It looked like he would be a future star.
Well, he still might -- Towles doesn't turn 25 until June. But he didn't help his cause in 2008.  Towles was expected to be Houston's primary catcher this year, but he struggled at the plate. He batted just .137 with 4 home runs and 16 RBIs in 54 games over three different stints in the big leagues this year.
Towles doesn't have the best signature... it's really not much more than some squiggles.
Posted by Paul Hadsall at 9:26 PM

He played for the A-ball team near me and I got his team card.