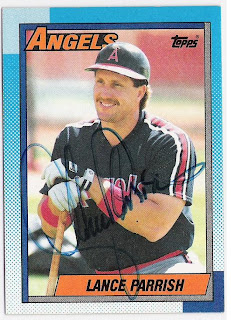 What is this? an "in person" autographed base card from 1990 topps aka (in my opinion) the ugliest topps set to date

Where'd I get it? in a trade i made with a co-worker about 12 years ago

How much did it cost? a lot. i traded a bunch of star wars stuff - the original stuff - figures, vehicles, etc. for a bunch of cards. i got a lot of cards, including a 1989 ud griffey jr and a 1971 topps nolan ryan, but i think i got the short end of the trade as time has passed

Why is this so special? is it special? lance did play in the dodgers organization late in his career, but never played in a game for the dodgers. he was a big part of the 1984 tigers, so he has that going for him.
here is my only lance parrish story. in 1989, i was living in orange county. i went to an angels/red sox game - jim abbot vs. roger clemens. i had clemens on my fantasy team, along with lance parrish. bottom of the first, parrish takes clemens deep - part of a 5 run first. clemens gets the hook after 2, and parrish goes hitless the rest of the way. turned out to be jim abbott's first career shutout.
Posted by gcrl at 5:35 PM

Check this out, my Great Aunt was a nanny for the Parrish's in the late 70's or early 80's if I remember the date right. Said he was a real nice guy.