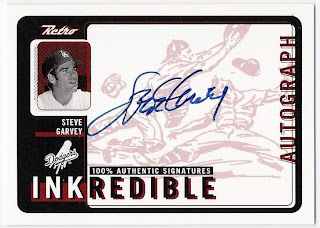 Who is this? steve garvey

What is this? an autograph card from 1999 upper deck retro

Where'd I get it? ebay

How much did it cost? i don't remember. i may have overpaid.

Why is this so special? steve garvey was my favorite player. he is the "g" in "gcrl". he led the dodgers to 4 world series in 8 years, was the national league mvp in 1974, won gold gloves (meaningless, i know) from 1974-1977, a ten-time all star and a two-time all star game mvp (again, meaningless), and a two-time nlcs mvp. he was, by all appearances, the all-american guy. i have a ridiculous number of steve garvey cards, inserts, variations, autos, relics, etc.
plus, this is the first card i ever purchased on ebay.
as for the card itself, the little photo of garvey leaves a lot to be desired. there is such a huge space on the card for the autograph, it's almost as if upper deck expected steve to write a short paragraph on why he irritated so many of his teammates.
the signature, while off-centered on the writing surface, is crisp, blue, and on the actual card. no stickers back in the 20th century.
Posted by gcrl at 4:00 PM