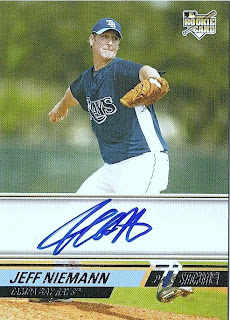 Who is this? Tampa Bay Rays prospect Jeff Niemann

What is this? An autograph card from 2008 Topps Stadium Club, card number 159

Where'd I get it? Out of a pack of Stadium Club

Why is this so special? When I got to my local card shop (J&L SportsCards in Charlottesville, VA), I was tempted into purchasing two packs of the new high-end Stadium Club. The price is a little steep for a prospect auto and two or three numbered cards, but the photography is great, as usual.

Niemann is one big dude - 6'9" 280 lbs. He was the fourth overall draft pick of the former Devil Rays in 2004 out of Rice University. He made his major league debut with the Rays back in April but was optioned back to Durham a week later. His minor league stats show that he's still a pretty solid prospect, averaging about a strike out an inning with a sub 4.00 ERA. Despite his impressive minor league numbers, he's probably blocked by that solid, young rotation in Tampa Bay. Look for him to show up elsewhere in the next year or two.
Posted by Patsearcher at 2:16 AM