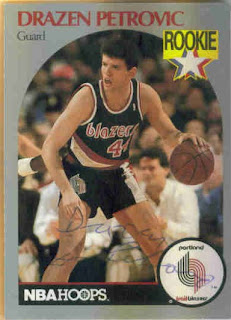 Who is this? Hall of Fame basketball player, Drazen Petrovic.

Why is this so special? It's the late, great, Drazen Petrovic. Just like the team he is representing on this card, Petrovic blazed a trail for every European basketball player that has made it to the NBA. I'm not a big enough NBA fan to know if he was the first Euorpean in the league or not, but I do know that he was the first good one. He's the one that made people realize that there might be some talent on the other side of the pond after all.

This card shows Petrovic as a Trailblazer, but he was better known as a Net. That's who he was playing for when I got this card signed. This signature is hard to see because it's signed with a ball point pen. He put #3 under his name, but unless the light hits it right, all you can see is the # on his shin.

For his '92-93 season, Petrovic was named to the All-NBA third team. He averaged 22.3 PPG and shot 45% from beyond the arc. He was in the top thirteen in scoring, but failed to make the All-Star team. That summer he was in a fatal car accident in Germany. He died at the age of 28. In 2003, he was inducted into the Basketball Hall of Fame.

I remeber Petrovic mostly for his 92-93 season. That season, he was the most consistent player on my fantasy team. The league owners consisted of the players on my middle school basketball team and Drazen, Shawn Kemp, and Clyde Drexler led me to the championship that year. That was the first and last time I played fantasy basketball.
Posted by zman40 at 1:37 AM