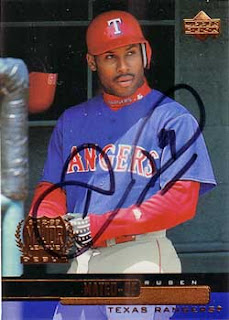 Who is this? Ruben Mateo, an outfielder who played for the Texas Rangers, Cincinnati Reds, Pittsburgh Pirates and Kansas City Royals from 1999-2004

What is this? A 2000 Upper Deck card that has been signed by Ruben Mateo

Where'd I get it? I got this card signed during the pre-game autograph session before the last Newark Bears game of the season this year.

How much did it cost? I think the card cost a dime. The autograph was free.

Why is this so special? Ruben Mateo didn't have a particularly impressive big league career. On the other hand, the independent Atlantic League where the Bears play isn't exactly the majors. Mateo hit 16 home runs in 50 games this year, and always seemed willing to interact with the fans and sign autographs.
The autograph is really more of a stylized mark than a true signature. I can interpret that first part as an "R" if I stretch my imagination a little, but the only part that's truly legible is the number 19.
Posted by Paul Hadsall at 2:59 PM

I followed Ruben's career and really thought he had a bright future. I can't help but think the horrible leg fracture he suffered was the largest factor in his demise. I was watching that game on TV and it was one of the ugliest injuries I had witnessed.

The other biggest Mateo memory I have is being at a game when he broke his bat and the barrel end helicoptered into the stands just below me. The sweet spot hit a mom in the head and the jagged edge swung back around and cut her daughter on the neck. It was pretty scary to see.