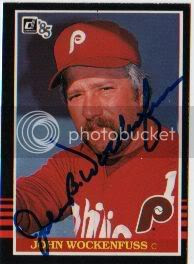 Who is this? John Wockenfuss

Where'd I get it? Out of one of those Tristar "Junk Wax and OMG AN AUTOGRAPH" boxes they used to sell at Walmart.

Why is this so special? I think this was the first autographed card I ever found. As I've stated before, I'm a sucker for anything that has to do with baseball cards. I can even open Tristar boxes and be happy with what I got. Also, he was born in West By God Virginia!

Johnny B. Goode... er, Wockenfuss was born in Welch, WV. He was drafted by the Senators in 1967, but didn't make it to the bigs until '74. He was a fan favorite in Detroit, but he didn't do much in Philadelphia. He only played 118 games over 2 seasons with the Phillies.

I like the fact that he was able to fit his whole name on the card (even though he had to turn it diagonally to do so), and his signature is extremely legible.

Oh, and check out his horseshoe mustache!
Posted by Billy Suter at 9:33 PM