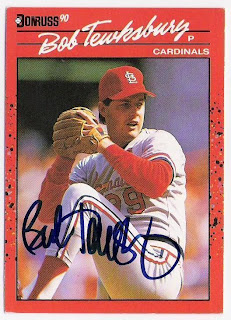 Who is this? bob tewksbury

What is this? an autographed 1990 donruss card

Where'd I get it? perhaps the tewks fairy? i really don't remember. in person at twinsfest or through a trade, most likely.

How much did it cost? not much, i am sure.

Why is this so special? i really like this card. the red border complements the red in the cardinals uniform, and the signature is strong in blue.
bob tewksbury pitched for the twins in 1998, and i saw him go against the cardinals one stormy day in the metrodome. this was during mark mcgwire's home run chase, so the dome was packed. tewksbury had been quoted as saying he was not afraid to use the eephus pitch, and sure enough, he threw it to mcgwire. i think mcgwire grounded out.
he was also part of the 96 padres, who, led by ken caminiti, beat the dodgers for the nl west title. but i won't hold that against him.
Posted by gcrl at 11:15 PM