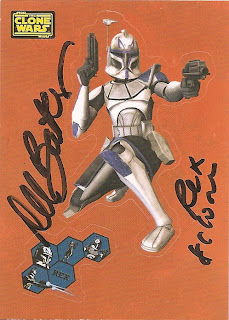 Who is this? Actor Dee Bradley Baker
What is this? An autographed 2008 Topps Star Wars Clone Wars sticker
Where'd I get it? I wrote to Baker through his agent and asked him to sign it. It took almost two years, but I got it back last month.
How much did it cost? The sticker came out of a $2 pack bought at Target
Why is this so special? I hate to admit it, but I find the Clone Wars cartoon almost more entertaining than the modern Star Wars film trilogy.

Baker, a veteran voice actor, plays Anakin's clone Captain Rex, Obi-Wan's clone Captain Cody and all of the other clone troopers in the show. He's played roles in shows as diverse as American Dad, Batman: The Brave and the Bold and Ben 10.

He's got a surprisingly legible autograph. Here is a sticker of the clone troopers that he signed for me. 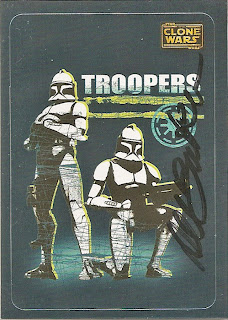 Wow, what a cool piece for your collection! The bottom sticker looks like someone took a ballpoint to it. Weird.

No ballpoint, just an odd foil sticker that my scanner doesn't really like. :)