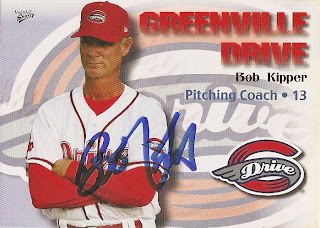 Who is this? Portland Sea Dogs pitching coach Bob Kipper
What is this? An autographed card from the 2009 Greenville Drive team set
Where'd I get it? I wrote to Kipper and asked him to sign a few cards earlier this month. A little over a week later, I got them back.
How much did it cost? Nothing, except postage.


Why is this so special? Bob Kipper was a major league pitcher for 8 seasons between 1985 and 1992 with the California Angels, Pittsburgh Pirates and Minnesota Twins. He began his career as a starter, but moved to the bullpen in 1988.

Kipper had a lifetime 27-37 record with a 4.34 ERA in 271 major league games. He finished his career in 1994 in the Mets' farm system. After retiring as a player, Kipper became a coach in the Red Sox system.

Kipper's autograph is quick and difficult to read, but you can make out more than just his initials. This is the first 2009 Greenville Drive card I've posted, and the first one that I've gotten signed. The set seems perfect for autographs, with a light background and nice portrait shots for most of the players and coaches.

Here are two other cards that he signed for me: 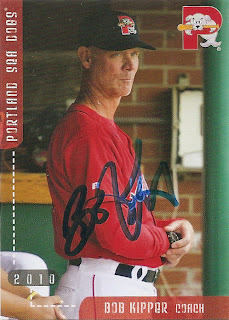 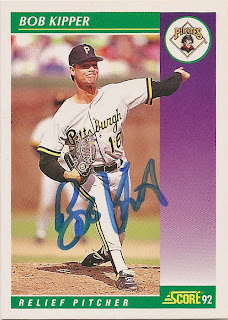 What happened to the Brian McRea auto from yesterday? It came up on my blogroll, but I could never navigate to it.

I'm afraid that was Blogger being temperamental and showing Friday's autograph a few days early.