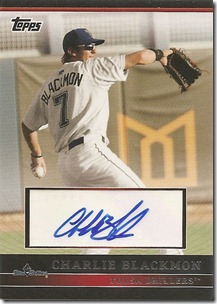 Who is this? Tulsa Drillers outfielder Charlie Blackmon

What is this? An autographed insert card from the 2010 Topps Pro Debut set

Where'd I get it? I pulled it out of a pack of Topps Pro Debut Series II cards

Why is this so special?

Charlie Blackmon leads off the game with a single off Hiroki Kuroda during a May 27 California League game between the Modesto Nuts and Inland Empire 66ers.

The Colorado Rockies drafted Blackmon out of Georgia Tech in the second round of the 2008 draft. Scouts believe that he has five-tool potential and could play any of the three outfield positions.

Blackmon’s signature looks very cramped… I wonder if it normally looks like that or if he was concerned about fitting it on the Topps sticker.