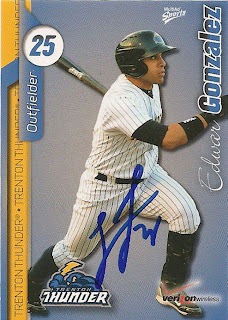 Why is this so special? Edwar Gonzalez is a nine-year minor league veteran. He began his pro career in 2002 with the Gulf Coast League Yankees at the age of 19. He advanced through the farm system, first arriving at Trenton in 2008.

He is currently a minor league free agent, so his time in the Yankees' system has likely reached an end. He could catch on with another organization, but I think independent ball is in his future if Gonzalez wants to play in 2011.

Gonzalez has an autograph that would drive collectors nuts if they were trying to identify it on a team-signed baseball - I would swear that it belongs to somebody with the initials "L.L."

Site Stats Fun
Our most-viewed posts last week were:
GCRL's post from February 2009, john wooden - through the mail success, is still the all-time most popular since Blogger started keeping track of stats, but the Star Driver autograph board is rapidly closing in.
Posted by Paul Hadsall at 6:07 AM