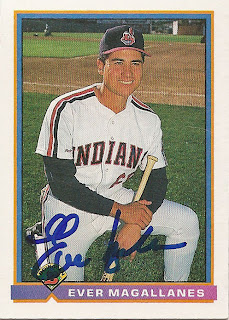 Who is this? Birmingham Barons manager Ever Magallanes
What is this? An autographed card from the 1991 Bowman set
Where'd I get it? From Zach of Autographed Cards, who probably got it signed at the Rickwood Classic this summer.


Why is this so special? Magallanes' major league career was of the "blink and you missed it" variety. He appeared in two games as a defensive replacement for the 1991 Cleveland Indians and one more as a pinch hitter. He did not get a hit in either of his major league at-bats, but he did reach base on a walk in his major league debut.

Magallanes' playing career lasted much longer - 19 years - with the majority of that time spent in his native Mexico. After retiring, Magallanes started a new career as a minor league manager with the Arizona League Angels in 2006. He is currently managing the Birmingham Barons, the White Sox' AA affiliate that briefly gained national attention when Michael Jordan tried to start a professional baseball career there in the mid-90s.

For a former player with a long name, Magallanes has a surprisingly neat autograph. Thanks for the card, Zach!

Since everyone will be busy with Thanksgiving, football and holiday shopping plans this weekend, this is going to be my last post on Auto-Matic for the People until Monday. Have a great holiday weekend everybody & be sure to take a moment to remember the things that you are thankful for.
Posted by Paul Hadsall at 6:48 AM