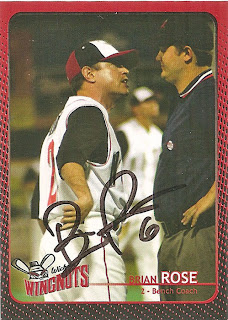 Why is this so special? Here's another card from the Wichita Wingnuts 2010 team set, one of the few night photos that was used. I don't recall too many instances where the bench coach got into an on-field argument with an umpire, so I'm guessing that Rose was handling base coaching duties or filling in for the manager when this shot was taken.

There are three Brian Roses that played professional baseball: a pitcher who spent time with the Boston Red Sox in the 1990s, another pitcher who played in the Colorado and Cincinnati systems in the mid-90s (thanks Night Owl) and a catcher drafted by the Arizona Diamonbacks in 2003. The Wichita coach never played professional baseball, though he does have extensive experience in baseball instruction. Rose is also a U.S. Marine Corps veteran, according to his bio on the Wingnuts' website.

It looks as though Rose added the number 6 to his autograph, which is puzzling -- he wore number 2 with Wichita.
Posted by Paul Hadsall at 6:49 AM

There were actually 3 Brian Roses who played major league baseball. There was another pitcher who played in the Rockies, Red Sox and Reds organizations, and then independently between 1994-2003. He even played in the Red Sox organization at the same time that the other Rose pitched for Boston, which was very confusing.

Rose was from a town that's about an hour away from me. I covered a high school baseball playoff game of his in which he struck out the first 10 batters. I covered another game in which he threw a no-hitter. He never got higher than Double A.

What an awesome photo on a Minor League card.

@Night Owl Thanks for pointing that out. I would have sworn that The Baseball Cube only had two Brian Roses listed when I wrote this over the weekend, but then I thought I had correctly linked the pages for the two guys I mentioned. I was wrong on both counts.

@Ryan The Wingnuts set had a bunch of unusual photos. I thought that some - like this one - were pretty cool. Others left me scratching my head.

Brian coached first for the Nuts this year. Between him and manager Kevin Hooper, they have to make up the shortest base coaching staff in baseball. I swear that they both look like they are 5'7".