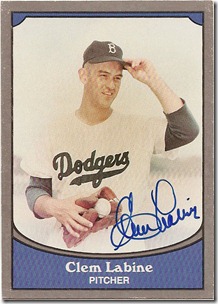 Who is this? Former Brooklyn Dodgers pitcher Clem Labine

What is this? An autographed card from the 1988 Pacific Legends set

Where'd I get it? At a baseball card show last month.

Why is this so special? Labine, a World War II veteran, spent 13 years in the major leagues as a relief pitcher for the Brooklyn & Los Angeles Dodgers, Detroit Tigers, Pittsburgh Pirates and New York Mets.

A two-time All-Star, Labine was part of two of the most famous teams in New York baseball history – the 1955 Brooklyn Dodgers and the 1962 New York Mets.

The ‘55 Dodgers are famed for winning the team’s only World Series in Brooklyn, while the ‘62 Mets are known as the worst team in modern baseball history.

Labine’s ornate signature is neat, but a little more difficult to read than many ballplayers of his generation.