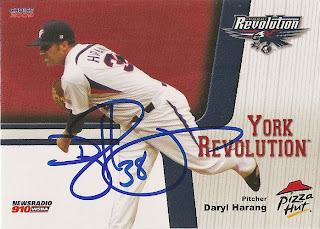 Who is this? former York Revolution pitcher Daryl Harang
What is this? An autographed card from the 2009 York Revolution team set
Where'd I get it? He signed it for me before a Newark Bears game this year.
How much did it cost? The team set was under $10.

Why is this so special? Daryl Harang, younger brother of Cincinnati Reds starter Aaron Harang, was drafted by the Toronto Blue Jays in the 23rd round of the 2004 draft. He worked primarily as a reliever and made it as far as AA New Hampshire in 2008.

Harang joined the York Revolution in 2009 and became a starting pitcher for the first time since college. He finished the season with a 10-12 record and a 4.08 ERA on a team with a 53-87 record.

In 2010, Harang split the season between the Long Island Ducks and two affiliated teams in the Reds' organization: the Lynchburg Hillcats and the Carolina Mudcats. He didn't post particularly good numbers in any of those stops.